An Ode
to Football

Pascal Claude launched his website www.45football.com with a simple goal — to collect as many football-inspired singles as possible. 1200 records later, he shares with us his favourite quirky football songs, vinyl covers and stories.

Tell us a bit about yourself. (background, early years, education, etc.)

I was born in Central Switzerland in 1970, in a village near lake Lucerne, where I graduated in 1990. I was the singer of a local hardcore punk band, we released two singles and some more songs on samplers. In 1991 I moved to Zürich to study at the university. Here’s where I stayed. I live here with my family and I work nearby in a public school. I do special needs education, which means I support children with all kinds of difficulties in meeting the daily scholar requirements. Besides all that I’ve written about football — or to be more precise: about the peripheral areas of football for the last 25 years, for newspapers, fanzines, football magazines. I had my own fanzine and released books as well.

That’s the approach to a subject I learnt to love and practice in the punk and hardcore scene: You want to do your own record, fanzine, book? Do it! And do it yourself! 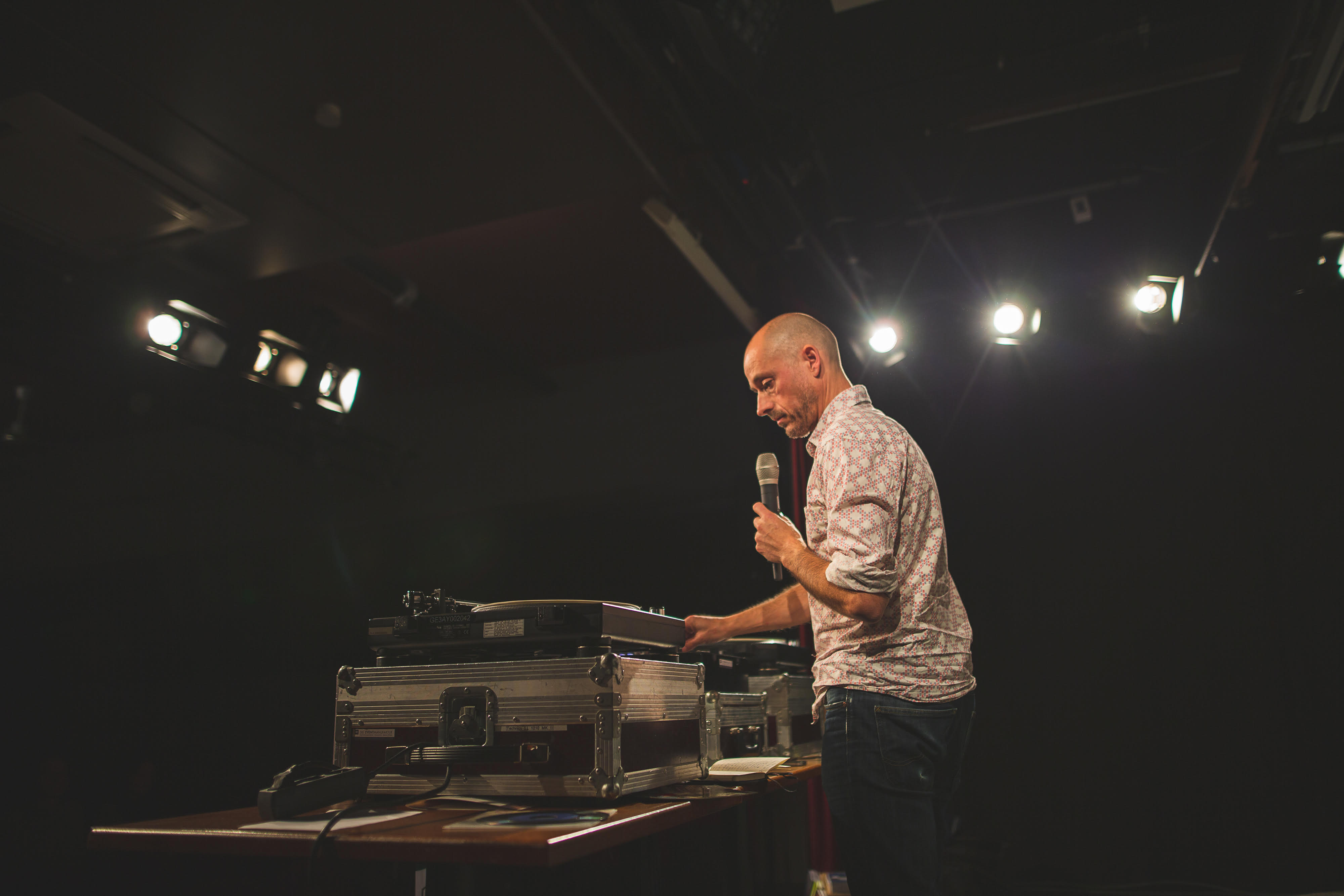 What came first: the love of football or the love of music and vinyl in particular?
How did your hobby come to life?

I think the love of vinyl came first. I bought my first vinyl single in 1977, it was a song called “Swiss Lady” by the Pepe Lienhard Band. The song had a lot of airplay and as a 7-year-old, I thought it was the best song in the world. So I went to the local Hi-Fi store where they sold the Top 10 singles of the Swiss charts for 5 Swiss Francs each and I bought “Swiss Lady”. As it was my only record for a long time, I listened to it very, very frequently. Not to the greatest joy of my sisters and neither of my parents who were more into Bach and Beethoven. It was about then when I started to play football with friends before joining the local club in 1979. I became a real football lover, the 1982 World Cup was a revelation. But the passion for vinyl singles never vanished. Later in the hardcore scene, that format was probably the most important one. All the great bands started with a seven-inch vinyl single, even the ones that got really big like The Offspring or Green Day. I used to run my own mailorder for hardcore singles, I sent 50 dollars in a letter to San Francisco and got 10 singles by a new promising band instead. It all worked like this: with letters and parcels. And you had to read fanzines to know what new records were released.

Around 1990, I started to realize that there were football fanzines as well, like When Saturday Comes in London and all the punk-oriented fanzines of clubs like FC St. Pauli or Fortuna Düsseldorf in Germany. That was a magic thing: two of my passions seemed to merge! I loved those football fanzines and their way to deal with the subject, they were funny, critical, surprising. And anti-racist too, which was very unusual within the football cosmos back then. Some day in the mid-1990s my flatmate brought me a single from the local flea market, it was the FCZ-Song by the band Dorados. He thought that would fit perfectly. And it did! I had not been aware of that genre before. I had only known the big hits released for World Cups. So I started to have a look more seriously and

I found out that there were hundreds, if not thousands, of vinyl singles released to praise a football team — it was simply too attractive not to fall in love with.

And as a lot of my friends visit flea markets and vintage stores, the collection got bigger month by month. That’s why I featured a music page when I started with my football fanzine in 1997. 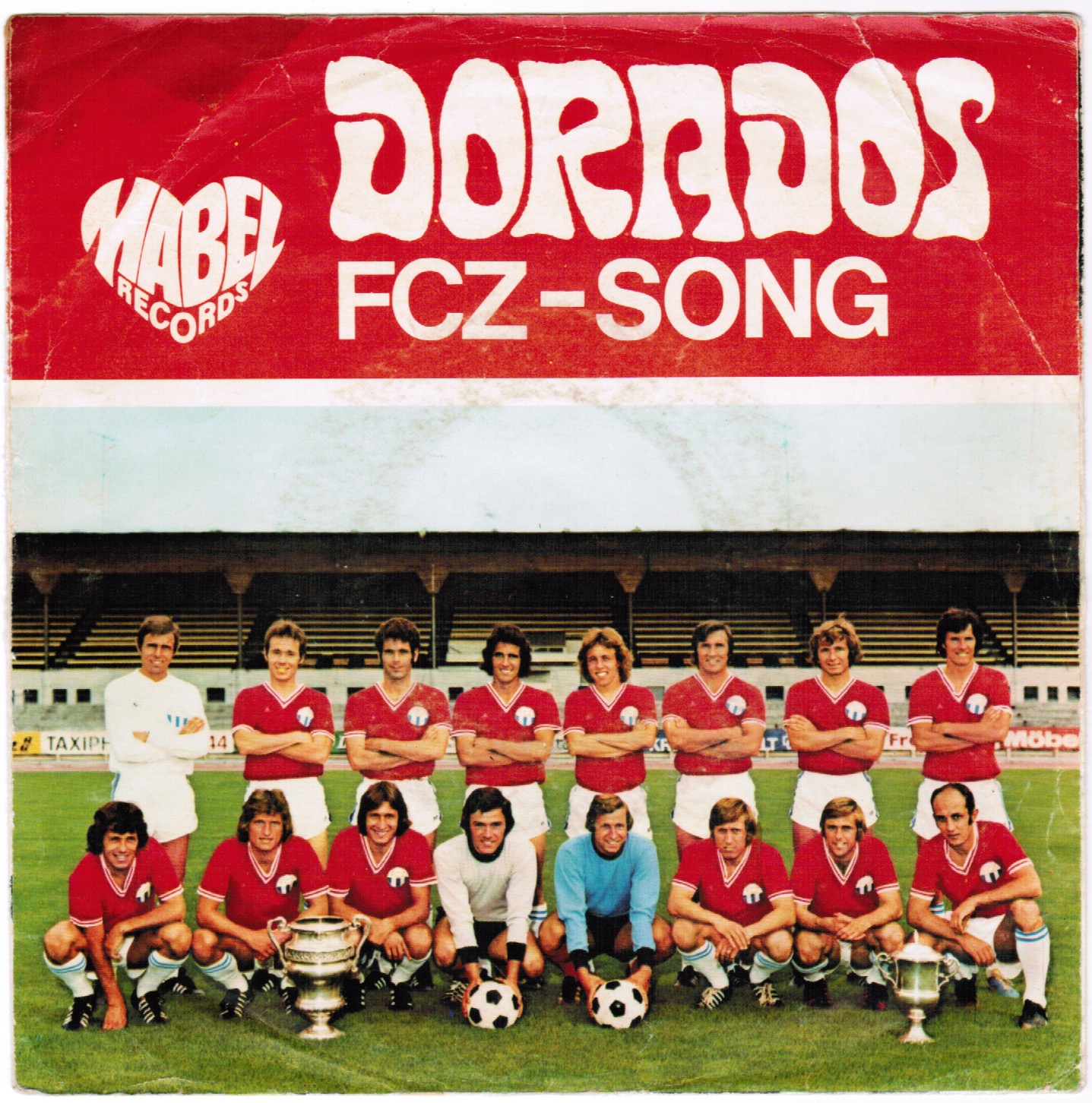 Many team sports are linked to music, but football seems to be even more so. Why is that?

In my book “Football Disco!” Grahame Waite from
footballandmusic.co.uk explains very well how football became Pop in the 1960s: Songs of the Mersey Beat were played and sung at Liverpool’s Anfield Road, while protagonists of the game like George Best started to be covered like pop stars. While Luciano Caldarelli tells the story of football and music meeting in the studios of Buenos Aires’ radio stations in the 1930s: Live broadcasting of football matches were accompanied by tango music played by local orchestras, and soon the chairmen of the clubs asked for their own club anthem. You can find these very early documents of football music on Shellac Records.

While other sports like ice hockey are more difficult to play and much more expensive, football is open to everybody. The simplicity of most of the football songs ever released on vinyl reflects the simplicity of the game. Besides that, the format of the vinyl single, invented in 1949, was the epitome for pop music, like German author Christoph Biermann wrote in his review of “Football Disco!”: It was cheap, easy to handle and promised instant joy — that’s what real football’s all about, too. 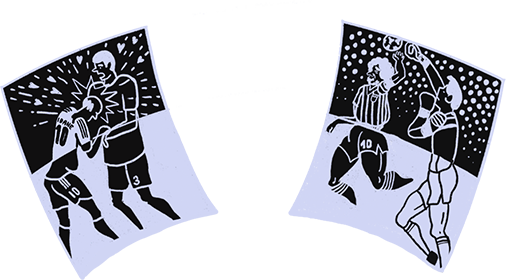 As all niche hobbies go, football vinyl collecting must have an unknown for many but dedicated network of collectors. How big is this society?

It is very small actually unless there were some hundred hidden collectors somewhere. I know only a dozen people in Italy, Germany, England and South America who really collect football music, but I’ve got around 1000 unique visitors on my website 45football.com every month, so there are some more who seem to be interested. Music-wise football songs usually aren’t a great pleasure, so I’m not surprised that it’s a small society. On the other hand, there are a lot of people who contact me through my website, asking for a certain song or providing additional information on a record. Among them are even family members of interpreters who are surprised to discover their long-forgotten father’s or uncle’s song on the site.

How many records do you own?

I’ve digitalized and uploaded around 1200 singles on my website and there are some more waiting to be regarded. So 1300 maybe. And some LPs too.

How do you typically gather them?

As I mentioned before, in earlier days I used to find them on flea markets and in second-hand record stores like the famous and wonderful 16tons in Zürich. Many I got from my friends in England, they just kept their eye on the sports-record section when they went through the singles in their local record shop. Another friend from Zürich is regularly staying in Italy and goes to record fairs. And when I stayed in Argentina for a while I went to all the markets and asked people, so I took home around 20 singles. These days I find most of the records on discogs.com, where around 800 football singles are on my wishlist. 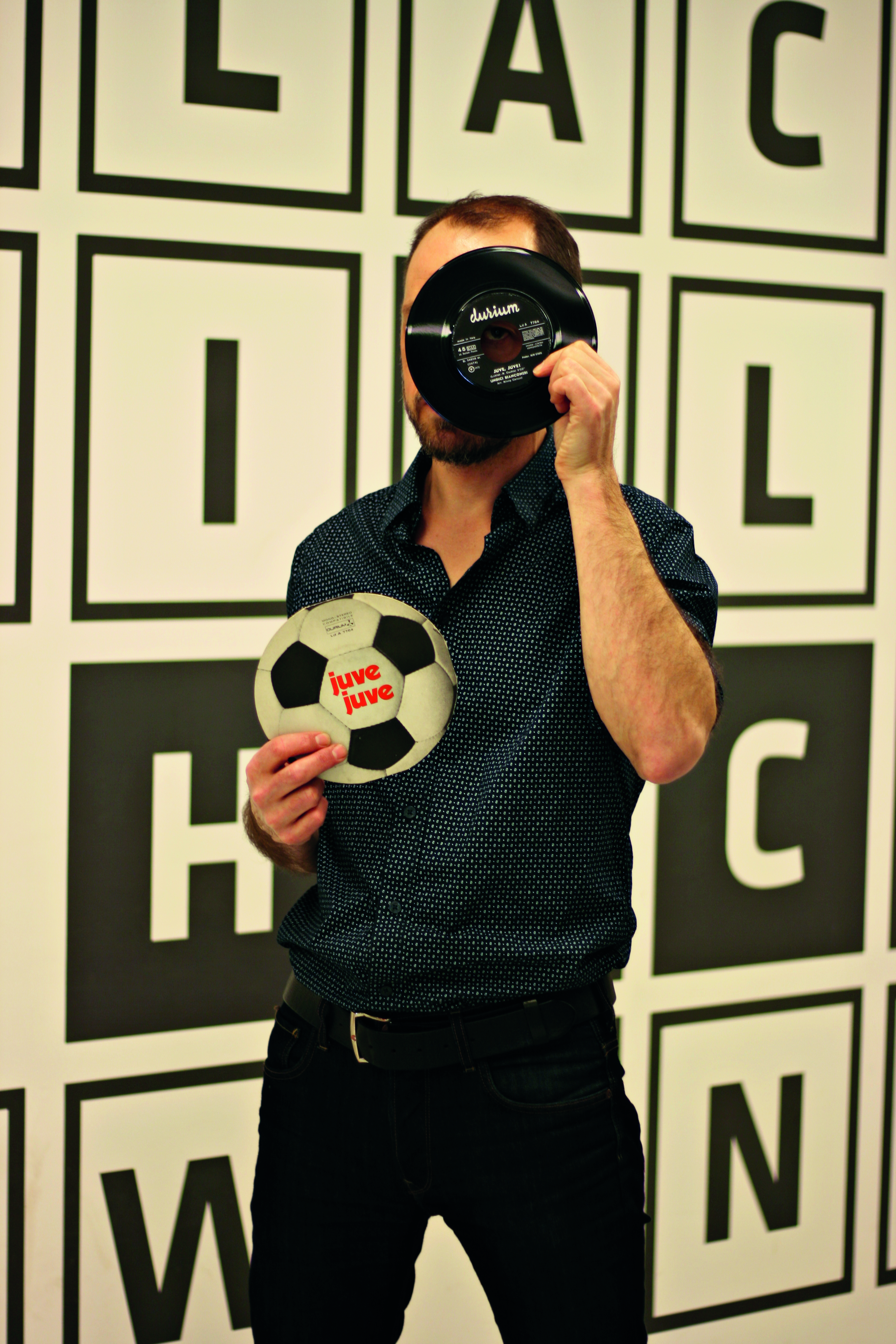 Is there a country/team/continent with significantly more football music than the others and why is that so?

Regarding football music on vinyl singles, I’d say that Argentina, the Netherlands, Italy, France, England and Germany are the top countries, and Napoli, Boca Juniors, Benfica and Ajax are the top clubs. The best time for the vinyl single was between 1960 and 1980 when, as mentioned before, the format was something like the incarnation of pop. Three preconditions were necessary for a high number of football singles: the average wealth of a country (people needed to be able to afford records and turntables), the popularity of football in the country in general and the fame and success of a certain club. At Ajax, for example, it was all there around 1970.

What’s the most interesting story around a football song that you know of?

There are several really good stories, but the best may be the one behind “Blue is the colour”, Chelsea’s famous club song from 1972. The bigger my collection got, the more records I found with adaptations of that song. In the very same year of 1972, three singles were released to the tune of “Blue is the colour”: Hammarby (nickname Bajen) from Sweden with their club song “Bajen va’ namnet”, some players of the Czechoslovakian Football League who sang “Zelená je tráva” and Dutch entertainer Vader Abraham did “Ajax, leve Ajax!”. In 1976 the US soccer team Portland Timbers released “Green is the color”, and in 1978 German singer Achim Sommer used the Chelsea song to sing a german football tune for the World Cup, “Olé Argentinien”. That’s a stunning lack of imagination and creativity, but I love it. 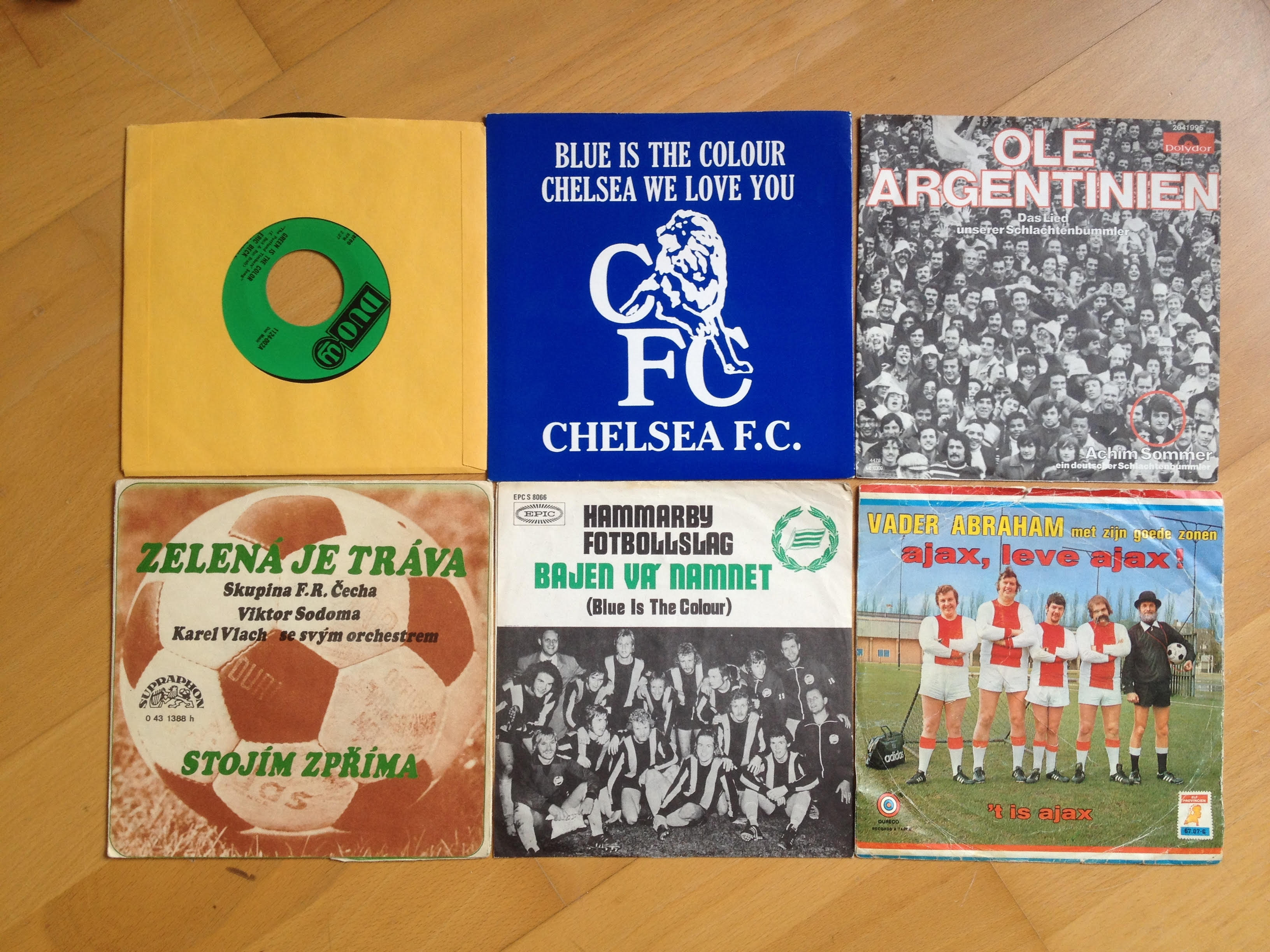 Top 3 (or more) of the weirdest football songs you know of or own?

That’s a hard question as there are plenty of very weird ones in my collection, but I’d say these three are definitely worth being lighted up: “Das ist FCK” from 2012 by some supporters of FC Kreuzlingen from the 5th Swiss League. It’s a hilarious ode to their club to the tune of Dean Martin’s “That’s amore”. “Atalanta Disco Dance” for Italy’s Atalanta Bergamo from the early 1980s is a crazy adaption of Trio’s “Da Da Da”. And then there’s “Sokol pie voda na Vardarot” from 1964 released on a singing postcard — that’s an A5-postcard with a flexi disc pressed on it and a hole in the middle so you could put it on your turntable — a song for Vardar Skopje that I find weird simply for its surprising beauty. The singer is Marija Grozdanovic and her voice is stunning. It’s a beautiful local folk melody, very unusual for football songs. 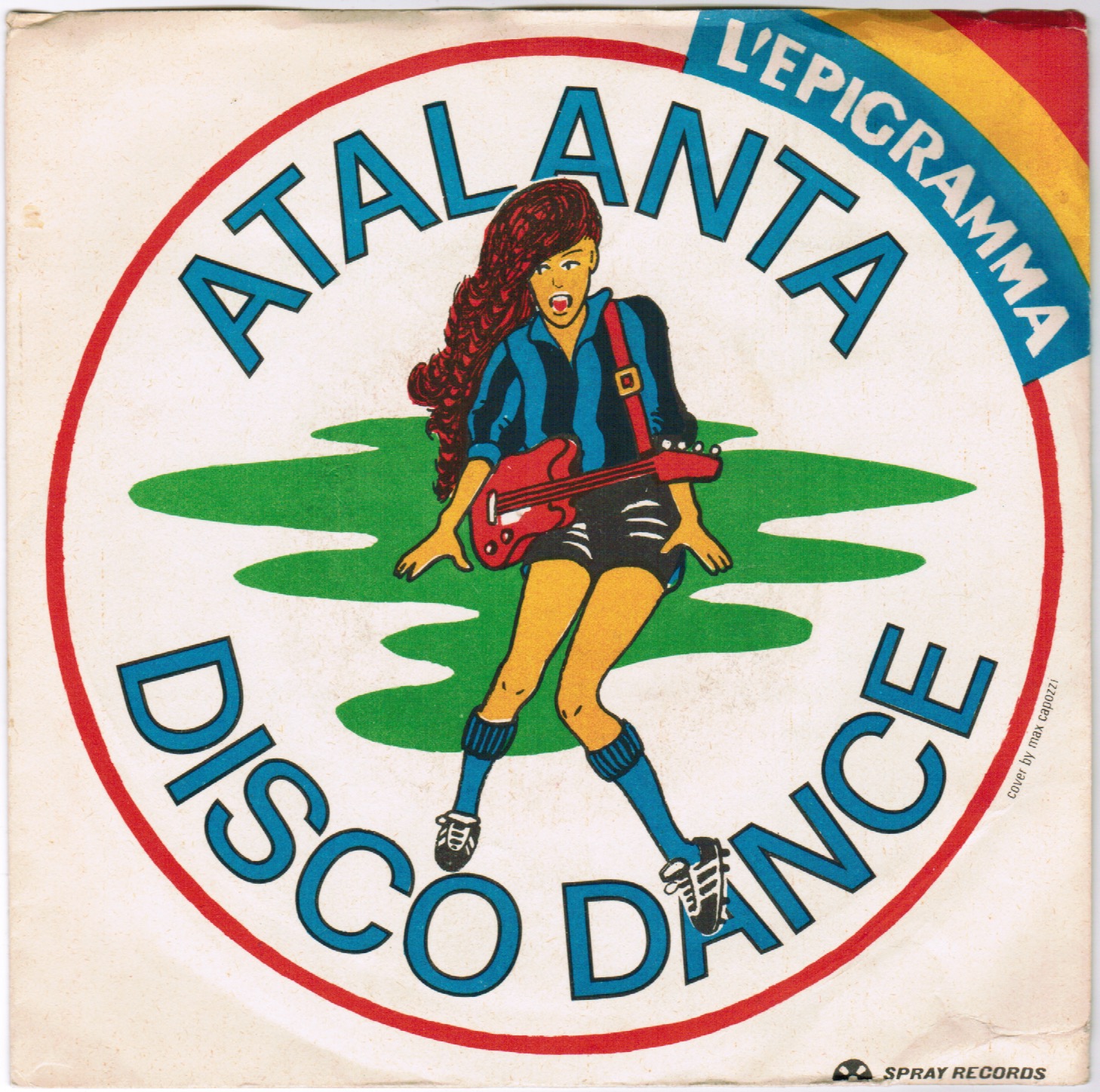 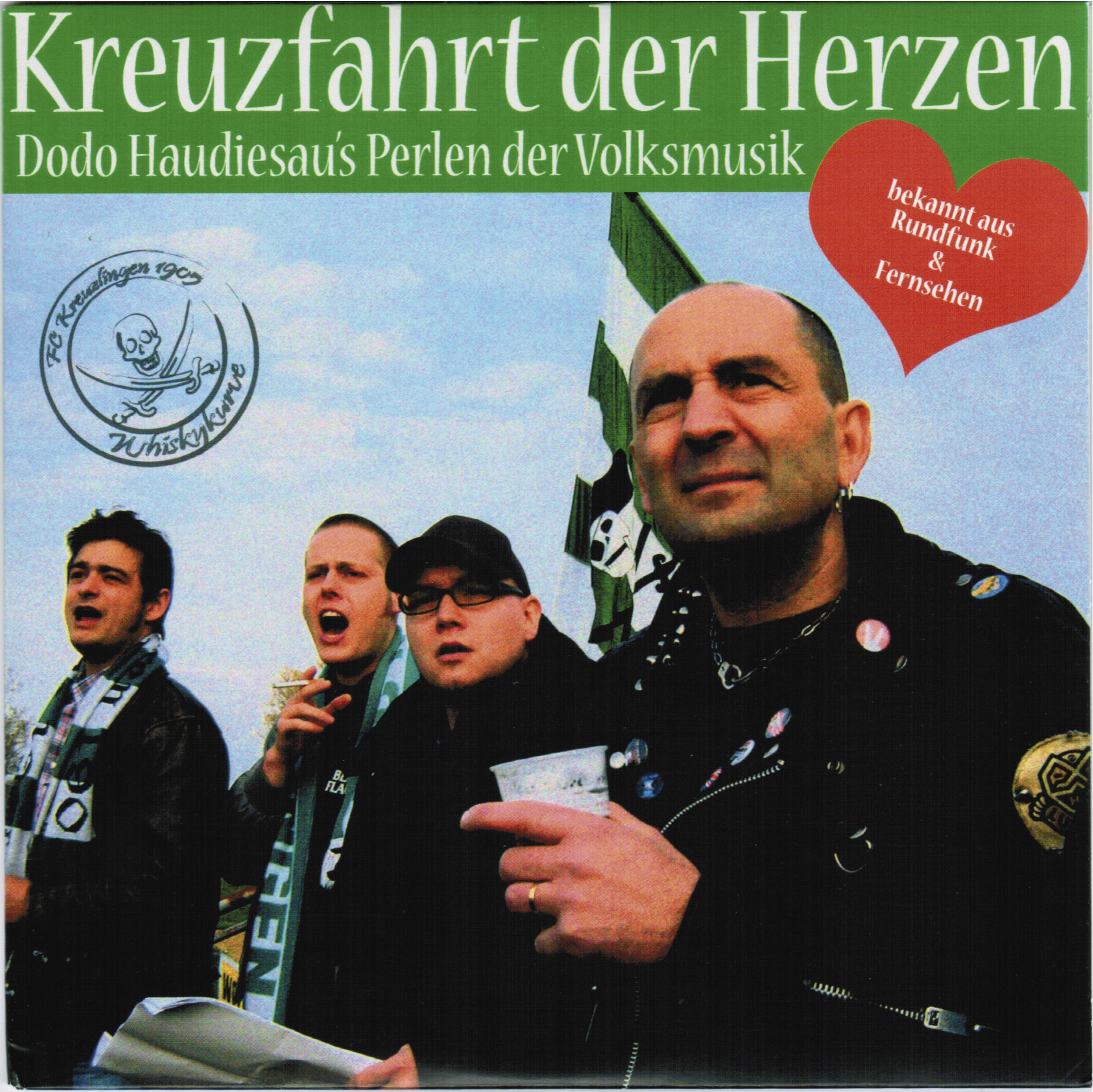 The same goes for cover art: if you have to choose 3 favourites (for being beautiful or beautifully weird) which would they be?

You name it, I love the beautiful ones as well as the beautifully weird ones: “Forza Sampdoria” shows some simply perfect 1960s Italian graphic design. “Fortuna Köln is in” from 1989 proves how terrifying football record covers can be, the sleeve showing the band “3 Söck” is nearly as bad as the song itself. And then you’ve got “De Lierse” from Belgium that exemplarily shows the heartwarming amateurism of so many football records — it looks like the singer’s children were asked to draw a sleeve. 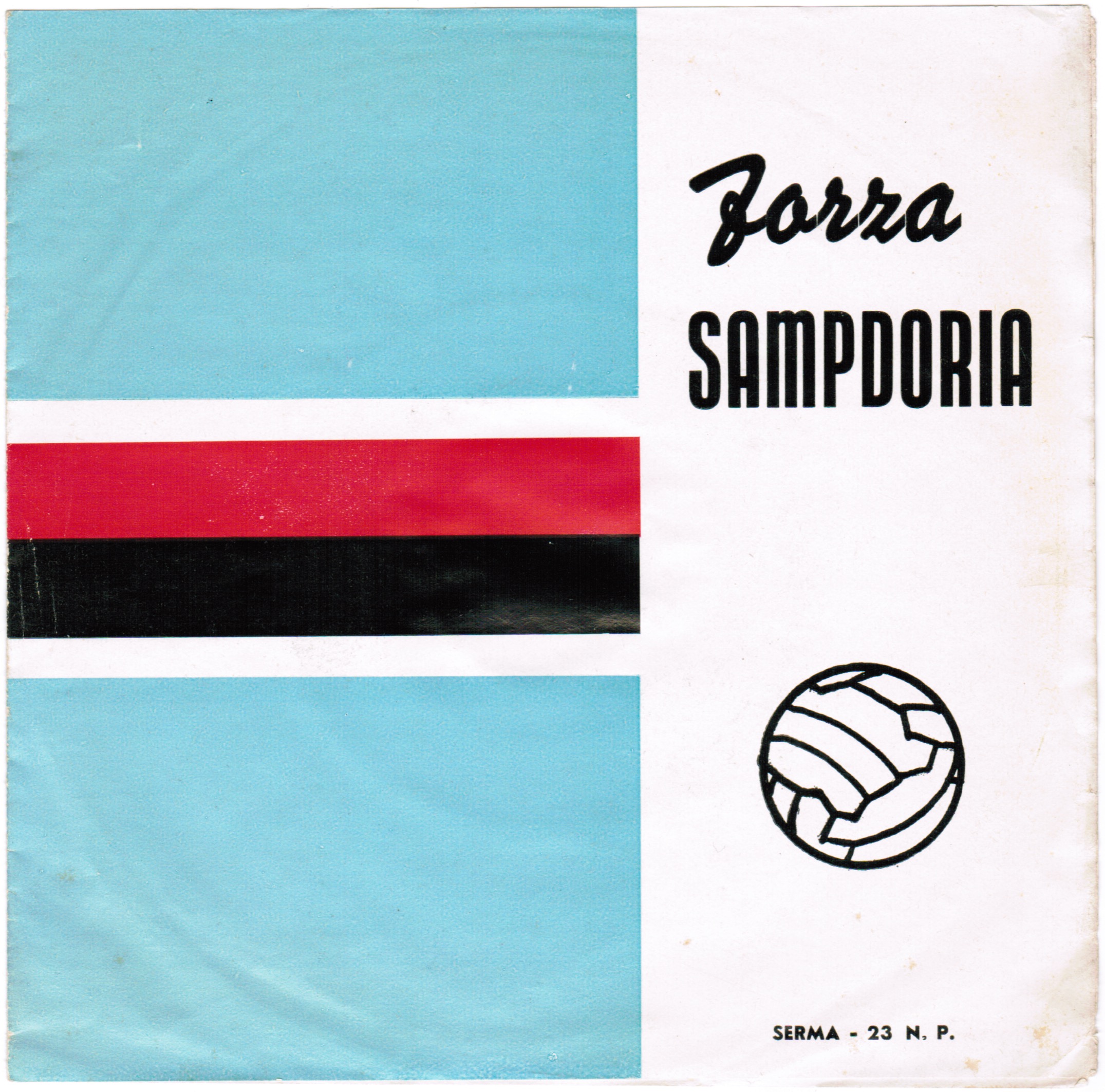 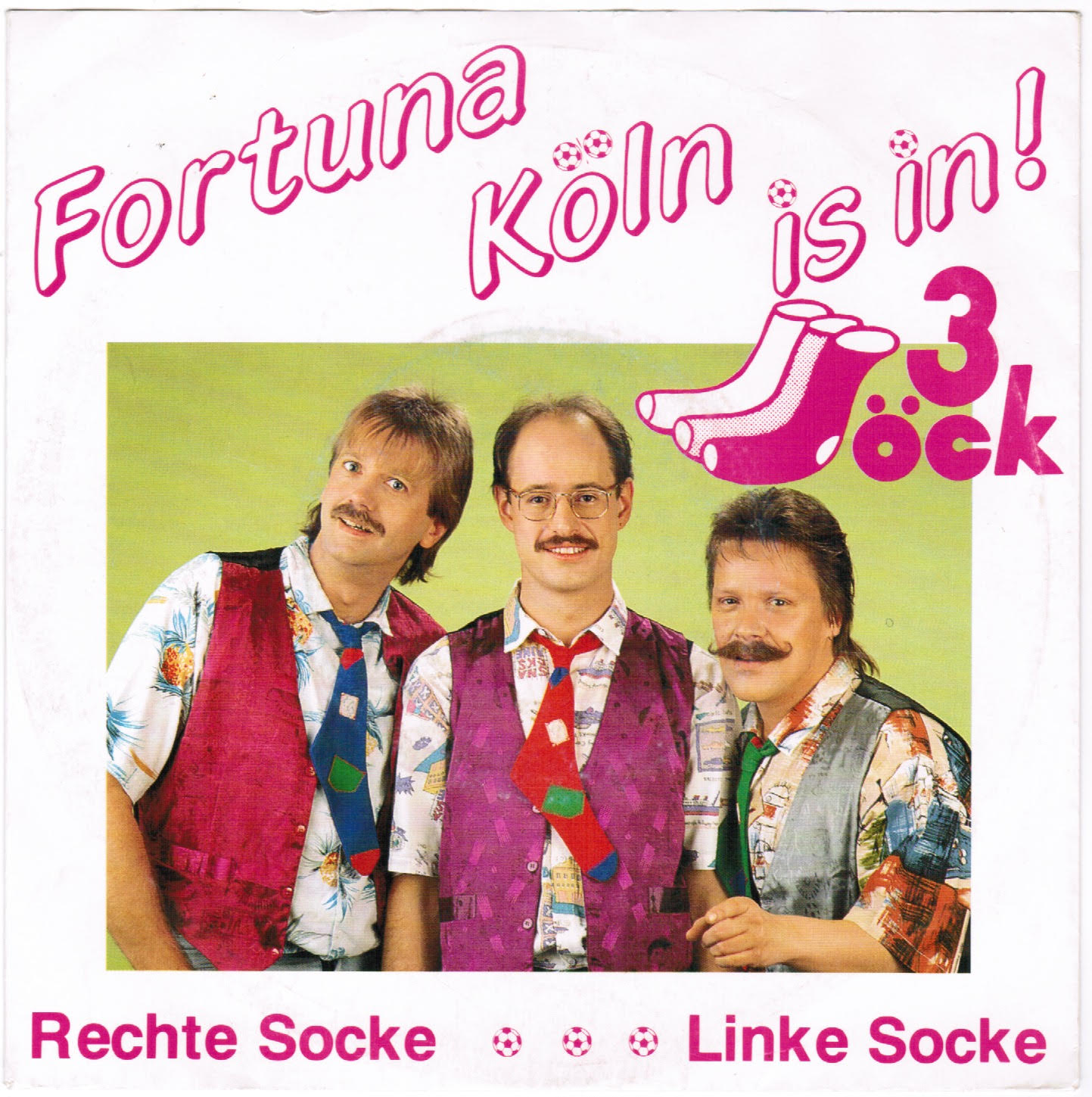 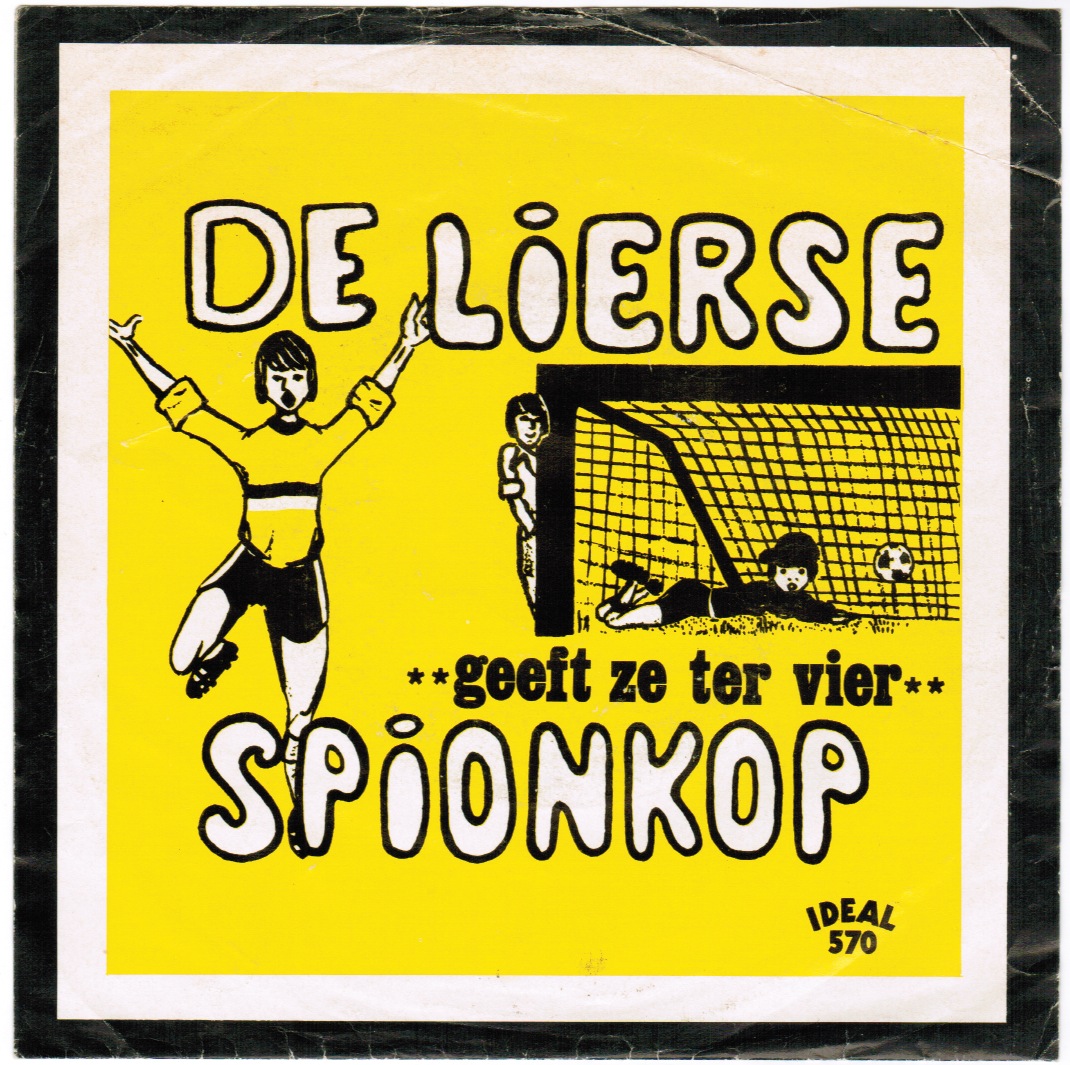 What’s your personal favourite: due to team allegiance or just objectively good songwriting?

It changes quickly. But one single I’ve adored for many years now is “Muchachos yo soy de Boca” by José Berra and his Orchestra, a tango for Boca Juniors from 1967. From the sleeve to the song, this is a beauty. And thanks to this record I got in contact with Boca supporter and Boca music expert Luciano Caldarelli ten years ago who has become a good friend since. 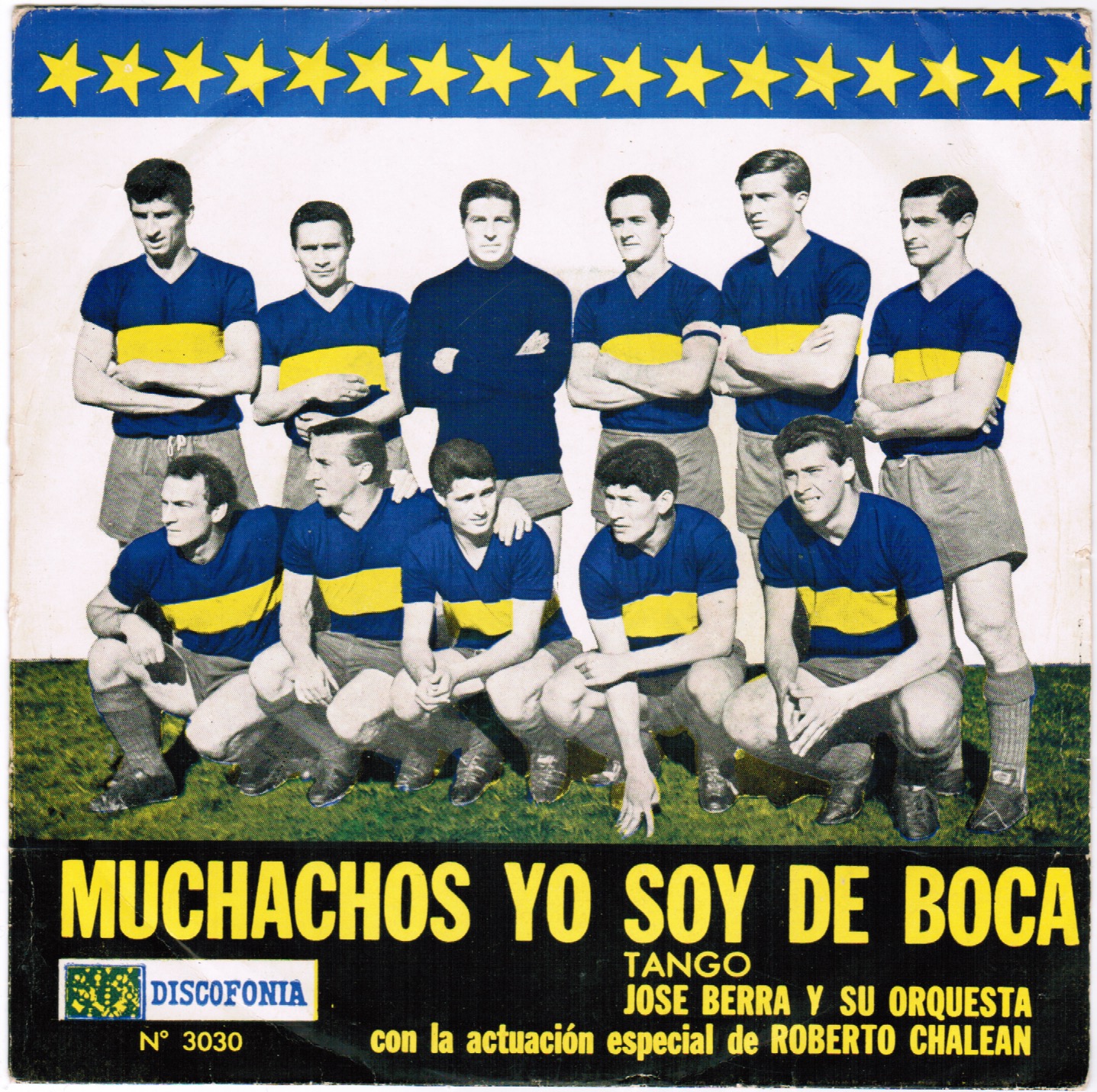 You have also published a book — Football Disco. Is vol. 2 in order as your collection continues to grow?

I haven’t talked to the publisher about the idea yet, but as there are still some copies available I don’t think Vol. 2 is about to follow quickly. But we might think about an expanded version of Vol. 1 someday, yes.

I’ve just finished my studies and so theoretically there’s more time for presenting the records live on stage but as we all know it’s not the time for it. So I’ll continue to expand my website, waiting for better days to come. Right now we need to be patient and look after each other.